Dar es Salaam. Cloudy day and a bit of sun; not cold, not hot. This was the weather on a Saturday of February 12, 2022, in the Tarime district of the Mara region, northern Tanzania.

We are here for an appointment with families and colleagues of two youngsters, Wilson Damas and Richard Kayanda, who had gone missing since October 26, 2020, and are never to be found again.

The youngsters were members of CHADEMA and were part of the campaign team of the then CHADEMA parliamentary candidate for Tarime Urban Esther Matiko.

The families of the missing boys as well as their party believe that their disappearance is connected to their involvement with opposition politics and have since been demanding answers from relevant authorities. To date, no substantial feedback has been forthcoming.

This has been a cause for both disappointment and frustration to the families as expressed by the wife of Damas Wilson Esther Wansatu during our conversation.

“I have just given up,” Esther, a mother of a two-year-old daughter, says. “I’m no longer hopeful that my husband will return. Even in dreams, I can’t see anything positive about the future.”

When Damas disappeared, his daughter couldn’t speak and was still learning to walk confidently. She can now utter a few words and is very active physically.

Damas and Esther were a young couple who had a dream of building a better life for their new family. Damas was working three jobs before his disappearance.

He was a barber. A motorcycle rider. A casual worker. During the 2020 election campaign, Damas and his friend Kayanda joined the Esther Matiko team as security assistants.

When Damas disappeared, he left his wife and their young daughter in a rented home. But things quickly became tough and Damas’ wife had to return to her mother’s home.

They now live there together with her young relatives, her daughter, and her mother Diana Charles.

Diana has raised Esther and her young siblings for years as their father passed-on years back. She now raises her granddaughter, doing stove selling businesses, while her daughter has returned to do casual construction jobs.

While they can work to put food on the table, they are troubled by the silence surrounding the disappearance of his son-in-law.

“We have tried our best to look for them,” she tells The Chanzo. “But the silence has been deafening. There is no hint of their whereabouts. It would have been better to know if they are dead or alive. This is really painful.”

‘My husband will come back’

When Richard Kayanda decided to build his life in Tarime in 2013, he had nothing to his name. He even had to live at his relative’s home together with his wife and their two children.

As a young man, he was hopeful that his skills as a painter will eventually help him build his life and that of his family.

Fast forward to 2020, together with his wife Jael Kayanda, Richard managed to buy a plot of land and built a small house for his three children and wife. But the world came crushing to his family when they learned that he had disappeared on October 26, 2020.

The string of nightmares continued to hit Kayanda’s family as they continued to search for him. His last-born suffered a burn and had to be bedridden for a number of days.

Jael went on to lose her small clothing retail business and day after day had to provide answers to his children on the whereabouts of their father.

But Jael has not lost hope. She believes that her husband will be found. She tells The Chanzo: “I’m very hopeful that my husband will return, please help me find him.”

Optimism notwithstanding, frustration still haunts Jael as she is thinking about the future of her two sons who are completing their primary level education this year.

She points out: “This year, my two sons are completing their primary level education and they will be going to secondary level. We need all the help we can get.”

Both Esther and Jael believe not enough efforts have been done to ensure there are answers for their husband’s disappearances.

They believe their former employer Esther Matiko has not done enough as a Member of Parliament. They also blame the police, CHADEMA and the government for the unresolved mystery surrounding their husbands’ fate.

Are they dead or imprisoned?

But as far as Ms Matiko is concerned, the now Special Seats MP believes that she had done what she could as an individual to demand the answers on the boys’ whereabouts.

But her efforts have so far been fruitless given authorities’ reluctance to cooperate with her, she says.

“We have looked in all prisons; we have reported to all security apparatus from the district level and the national level,” she tells The Chanzo. “[Both] the Inspector General of Police  (IGP) [Simon Sirro] and the Minister of Home Affairs [Hamad Masauni] know about this case.” 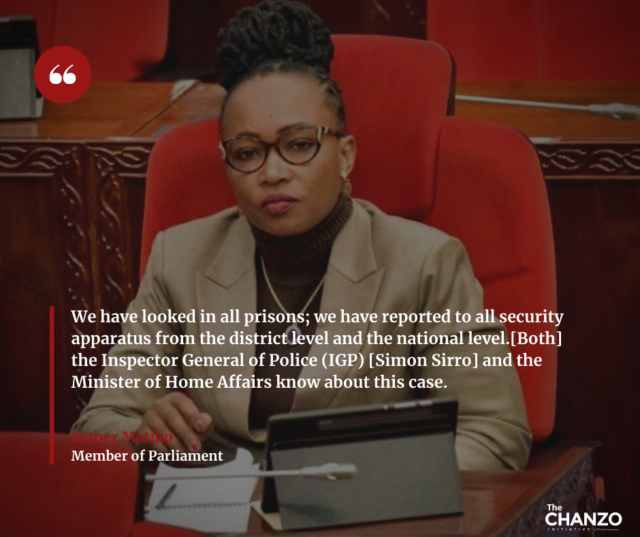 In May 2021, Ms Matiko demanded the government to explain the whereabouts of the boys in a speech in the parliament.

She recounted that on that fateful day of October 26, 2020, Damas and Kayanda were coming from her house when they went missing and were never to be found again.

“Until now, we don’t know the whereabouts of these young men,” she informed the parliament in a very moving speech. [These men] have got wives and children and they were the breadwinners of their families. Please, tell us. If they are dead so that we can mourn them or if they’re in prison so we can visit them.”

Local CHADEMA leaders in Tarime have also joined the chorus of calling upon relevant authorities “to do what they are supposed to do” in investigating the whereabouts of their party colleagues.

But it seems like authorities do not share the urgency of the matter with the men’s families and their fellow party members.

Tarime Rorya Regional Police Commander (RPC) William Mkonda, for instance, when asked if the families should expect any good news from the police regarding the fate of their loved ones said if the families reported the matter to the police they should consider going there and inquire about the progress.

Tip of an iceberg

But it is not just the families and friends of Damas and Kayanda that might be disappointed at Tanzania’s security organs’ apparent failure to provide timely answers about the fate of their loved ones.

The same feeling might be shared by the families of five men namely Tawfiq Mohammed, Seif Swala, Edwin Kunambi, Hemed Abbas and Rajab Mdowe who went missing on December 26, 2021, in Dar es Salaam to never be found again.

The men were reportedly arrested by police on December 26, 2021, around the Kamata area in Kariakoo, while they were on their way to one of the beaches located in Kigamboni.

Dar es Salaam Special Zone Police Commander Jumanne Muliro confirmed receipt of the report of the men’s disappearance but said that “it should be dealt with just like any other case.” Nothing has been coming from the law enforcers on the whereabouts of the men.

The result of such a situation can be predicted: confusion, as expressed by Slyvia Quentin, a parent of one of the missing men, Tawfiq Mohammed: “I’m confused,” she told The Chanzo. “I cry and sleep all day. I keep praying that wherever he might be my son is okay and will come back to me while still alive.”

If the fate of Damas, Kayanda and the five other men from Dar es Salaam is going to be the same as that of a freelance journalist Azory Gwanda, CHADEMA national chairperson assistant Ben Saanane or the chairperson of Kibondo District Council in Kigoma Simon Kanguye then their families and loved ones have a very few reasons to be optimistic.

Gwanda, Saanane and Kanguye disappeared in November 2017, in November 2016, and in July 2017 respectively and their whereabouts have been a mystery ever since and it is not even known if authorities are investigating their disappearances or they have dropped the cases altogether.

If after reading this your conclusion is that it’s against the laws of nature for people, items, or animals to just vanish in thin air without the existence of any explanation then you will be right.

But that is how you can describe the disappearance of these people whose families continue to demand answers and accountability.

Maybe it is not that late for relevant authorities in Tanzania to provide the needed answers!