The ruling Chama cha Mapinduzi (CCM) appears to be in preparation for a new game plan that would ensure its sustainable future in Tanzania and if there is a defining moment for such a process then that moment is 2022.

The party seems to be cognizant of this fact, telling from its just-concluded intra-party elections and its two-day party congress in the capital Dodoma.

As far as the intra-party elections are concerned, which peaked in September 2022 and were concluded last week, they have got a lot of tales to tell.

It is just fair to describe them as a mirror of the second longest-ruling party in Africa’s triumphs, struggles, fears, and things to come for the party and country.

Fighting demons of its past

One of the tales that was obvious during this election was that CCM was struggling to break free from some of its past habits.

During the regional and districts election, one thing that was obvious was the struggle that ‘the men and women or kingmakers’ of the party faced. During the elections, people who are known to be good mobilizers managed to get seats in the place of people who appeared to have powerful party sponsors.

In the recent past, there was a growing culture within CCM that almost everything is decided from the top down, the men and women at the top would influence and exclusively decide whom they want, stop whom they don’t want, and in most cases without any reason whatsoever.

But this time around CCM members appeared to have assumed their roles with a vengeance, electing people they want, and going against kingmakers in several regions.

CCM also tried to redefine its internal structure, a process that former President Jakaya Kikwete described as going back to the basics.

“But what gives me hope, Honorable Chairperson, is the return of the basic settings for organizing our congress,” Mr Kikwete told President Samia Suluhu Hassan, CCM’s national chairperson, during the party congress in Dodoma.

“That’s when you organize a congress, the government and the party reports would be read and members will also have the opportunity to discuss,” clarified the fourth president of Tanzania.

The past party leadership, under the chairmanship of the late President John Magufuli,  was heavily criticized for muzzling the participation and freedom of members in the party.

The level of sincerity throughout the engagement was evident by the issues tabled, most of which are also issues of concern to citizens.

But there are still many demons of its past that CCM will have to confront. For example, its ability to do politics, an ability now weakened because of over-reliance on state machinery.

The increased participation and politicking in the party show that CCM might start to shift from over-reliance on state machinery to more politicking.

During the conclusion of the party congress, there were several issues pertaining to party organisation which were presented by the top leadership, one being citizens’ perception of the party.

It was President Samia herself, as the party’s chairperson, who raised the issue, giving an example of how people in the past used to have a belief in the CCM, a belief she now thinks has evaporated.

Samia said that oppressed people used to run to CCM for help; that citizens could be scared of everything, including the police, but not the party.

“But today, let us judge ourselves, in our own areas, when did citizens run to us and when they do come, how are they being received?” Samia challenged her fellow party members. “I ask you sincerely. Let’s return the faith of our people in the party, that they should know CCM is their refuge.”

READ MORE:Samia’s Speech at the CCM’s 10th Congress: “We will not let you down”

Of course, this is a mountain of tasks on its own as CCM has increasingly become a party of the elites, and most of the men and women join it with the perception of getting something out of it. Does CCM still relate to common folks and the poor? I’m not sure. 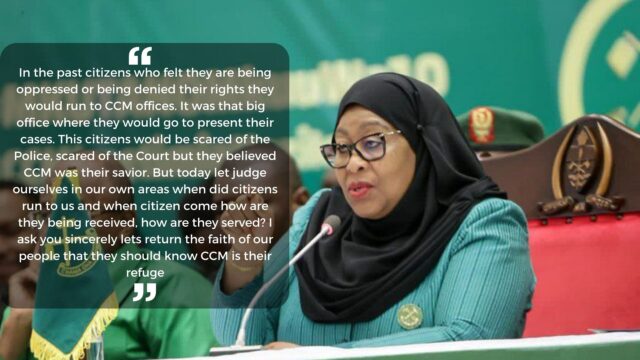 I’d say that the government’s behaviour has not helped sell the case of CCM. It’s a fascinating encounter that every time President Samia manages to increase her ratings among the popular masses there is always an immediate incident that will bring it down. Take, for example, the period between April and May 2021. This was the time when the whole country was rallying behind her, and before we knew it, authorities brought terrorism charges against CHADEMA national chairperson Mr Freeman Mbowe.

It was during the same period when authorities chose to go against petty traders, popularly known as Machinga. As you would have rightly imagined, Samia’s support base was weakened.

It also seems like the Samia Administration is always in a never-ending tension with the poor: from small traders to residents of Ngorongoro and Loliondo, including the Maasai.

Even the recent narrative that pastoralists are the cause of water shortage, to the latest eviction of over 21,000 people in Mbarali and the similar incident of eviction in Morogoro appears to be more damaging to Samia’s political base.

It is true that things are going really well on the private sector side, as the tribulation and injustice that they had endured which broke many businesses, force some to flee, and others to be jailed for no reason are being corrected.

But unless it’s by design to make an impression on the rich folks only, CCM needs to find the right balance. A leadership without popular support makes it vulnerable.

The business community support is important, and other groups’ support is crucial but legitimacy comes from popular support.

The leadership of the party has also directed the party to invest in training and in building the capacity of its wing. To this end, I will focus on the youth. There is a youth dilemma in CCM.

In the past, CCM had a strong culture of mentorship and apprenticeship which has been informally replaced with a culture of sponsors and beneficiaries who are known as chawa (lices).

These are the youth who would position themselves as praise singers, most with little to offer to the party, and also attach themselves to a certain sponsor. Some of these types of youth have been successful and graduated in some roles.

The upside of this culture is that it makes the party lose its appeal to the youth, the youth who are now more diverse than ever. This culture also crowds the party to the extent that it would never see talent.

If CCM is to organize and mobilize well, it has to respect its youth; the youth who toil at the back offices because they have no sponsors.

Preparing for a challenging future

At the moment, CCM is looking for triumph in the 2025 election but with a different direction from 2020 where controversy overshadowed the election.

In preparation for this future, party leaders have gone out of their way to ensure that the party remains stable and unified. And one of the issues is regarding President Samia’s candidacy in 2025.

Against the backdrop of rumours that the party would front a different presidential candidate apart from her, Mr Kikwete assured President Samia that none of that is going to happen.

Kikwete called the rumours that there is a young man or an old man who will run for presidency through CCM “pure nonsense,” guaranteeing his chairperson the candidacy.

“I’m not saying I’m stopping them, but I don’t see any member of the CCM who will take the form to oppose you in 2025,” Mr Kikwete said during the recent party congress.  “Maybe if things get much worse between now and then. but I don’t believe that [will happen]. It’s also not our tradition.”

Will the future of CCM be marred with division? That depends on how much popular support President Samia will garner between now and 2025. But there are other issues that directly affect this, the bad economic situation being one of them.

Prices of essential goods and services are up in Tanzania as I write this, a situation that has caused the cost of living to skyrocket. Tanzania is also experiencing frequent power rationing, a situation authorities have associated with the effects of climate change. Undoubtedly, this puts pressure on the government and also erodes popular support.

CCM under the helm of Samia needs to change its strategy to first appreciate the extent of patriarchy in Tanzania, understand the importance of the common folks and make an effort to relate to them.

But also CCM needs to have a long-term strategy for women. Women’s support is not automatic and they sure don’t want to be caught by surprise. I would advise CCM to specifically test and see what message resonates with this group. I’m not sure if CCM has figured it out yet.

On the other side, if the opposition needs to beat CCM, then they should have appealing and intentional policies for the youth. Understand that the big political game will be around the cost of living and the situation of daily earners, which include machinga, and food vendors.

The opposition also needs a specific strategy for women. It is my analysis that women will decide the 2025 election.

Tony Alfred K is analyst, writer and editor working with The Chanzo. He can be reached at tony@thechanzo.com and on Twitter at @tonyalfredk. Do you want to publish in this space? Contact our editor at editor@thechanzo.com.

Samia's Speech at the CCM's 10th Congress: 'We will not let you down'