On December 8, 2022, Tanzania’s ruling party CCM concluded its national congress, which involved the election of National Executive Committee members, and discussion of government reports, among other things. Below is the speech made by President Jakaya Kikwete. The introduction, where he explained to the members that he had missed the first day of the meeting because of chairing the Global Partnership for Education meeting was not included in this translation for summarization.

Returning to the basics

I just want to say congratulations for a good meeting. I have participated in these meetings from the time of the TANU annual congress  to CCM, as a junior officer until I became the chairperson, but I always see that the quality of the congress has continued to rise and this is one of the meeting that is really well organized and things have gone very well.

But what gives me hope Honorable Chairperson is the return of the basic settings for organizing our congress, that is when you organize a congress, government and party reports would be read and members will also have the opportunity to discuss. 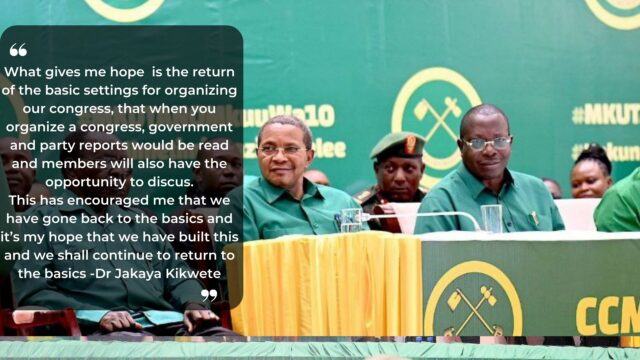 Therefore, Madam President, I thank you very much for seeing this and holding our meeting on that basis and you will see even in the discussion that a lot has been said. They have open-up from the bottom of their hearts they have appreciated the good, and they have also explained the challenges they are facing. And also presented their request to the party and to their government on issues they want to be addressed

This is the advantage but if you didn’t ask them this then you would not have given them an opportunity. Chairperson you wouldn’t have known, because the information of the Ministers to the President, this has also happened to me, is every day things are going well, there are these small problems but we can handle [they would say]. But here you have heard the small and the big problems.

Madam President, I congratulate you and, I congratulate the vice-chairman Zanzibar, the President of Zanzibar, and the chairman of the Revolutionary Council, Dr. Hussein Mwinyi and to Comrade Abraham Kinana. I congratulate you for being elected with so many votes, one, two or three [votes] were lost but its proof that this exercise was a sincere exercise. Because sometimes when all votes are one hundred [percent] they would say something is going on, but the votes have shown that people had a chance to vote and have voted the way they want and that is how to build our party.

Let’s stop this habit of dividing our party

Madam President, don’t listen to people’s rumors that there is this young man who will run, or this old man will run, it’s pure nonsense. I’m not saying I’m stopping them, but I don’t see any member of the CCM who will take the form to oppose you in 2025.  Maybe if things become too much worse between now and then, but I don’t believe that, and it’s not our tradition.  But let me tell you the truth, here in Tanzania today, is there any politician who is more prominent than Samia [No!- audience replied] there is no one in this party or outside this party. President, don’t be troubled by those words.

And others who say there is a Minister who has gone somewhere to collect money, they are just wanderers, we use to hear a lot of such words from a certain gentleman who called himself an independent activist it is a complete lie. And what I am asking you my brothers and sisters is stop lying. During the period leading up to this election, if you could read those words on the internet, a lot of nonsensical utterances but they are all complete fabrications. ‘That one [candidate] is supported by that elder’, pure nonsense.

Let’s stop this habit of dividing our party, you put our leaders under stress for no reason. Instead of them focusing on building the party and implementing their constitutional roles in leading this country they also have to deal with trivial matters. 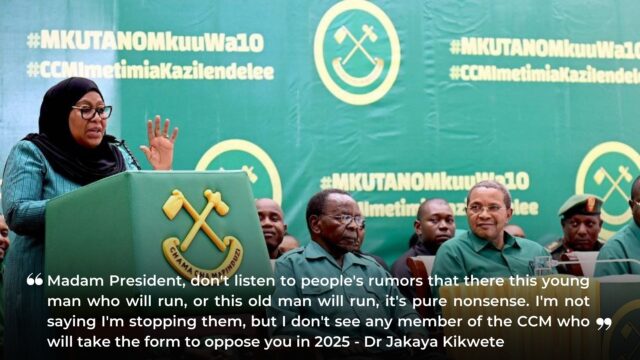 And to the CCM member who does that, I say this, guys, if you hear them with those rumours summon them to the ethics committee, call them to the ethics committee, ‘we have heard you say that there are ministers who have gone there, now they are appointed [as Ministers] but they are looking for the title of President, who is that? if they don’t know who , tell them to stop lying. That’s the only way we will remove uchimvi [pitting people] I used Kiswahili word uchimvi, I don’t know if my friends from Sukuma tribe know uchimvi, but uchimvi [pitting people] are these things of digging for rumors and pitting people against each other.

Our party is too big to tolerate such kind of nonsense. If you tolerate this, the party will be divided in the interests of stupid people, in the interests of liars who only dwell on the internet every day looking for things to write. But all of this causes division in our party and have no importance. What I ask you is to be strict, if you know a fellow member who is spreading lies, call him, ‘we thank you sir, you have given us good information, but do you know them, tell us about them’, if he has enough evidence, call him and those he has mentioned and you will know who is truthful and who is a liar, and you tell the liar stop and don’t repeat it.

Chairperson, this is how we will maintain unity and stability in our party. These rumors Madam President they will be a lot from now until 2025. There are those who will come and swear to God there are people who are ‘meeting’ surprisingly it’s him and a fellow fool who are meeting. We are putting our leaders in panic for no reason and the only cure is that [mentioned previously] in stopping lies.

I don’t want to give examples of what we have encountered in our lives or what we experienced in similar situations, but in my period I did not give a chance to that absurdity.

Madam President, I say this from the bottom of my heart that you are doing a good job.  Dr. Hussein is also doing a good job. The leaders of this party, should help our leaders find stability and stability is about not creating lies. If we refrain from that, this party will be stable until we got to 2025 and prepare for fights against our colleagues. Always they say in war you prepare as if the enemy is very strong and you don’t underestimate your opponent, in an election opposition will be there.

Even Makamba has said this, but those he has mentioned they will just collect forms for campaign. Lets us prepare and our preparation is for us to first ask ourselves if citizens decides not to elect CCM what would be the reason? Lets know the reasons and see if we can find answers, that this is the issue its response is this. Once we knows that then we will prepare well, every issue will have a response and for those which will not have a response you will say if we have managed to do this we will also do the remaining issue and people will trust you.

Lets us prepare with a belief that the next election will be hard, opposition will be very strong and we will also organize ourselves at a great strength. Abdu [Vice-chairperson] knows in the army if the enemy has brought one battalion you go with a brigade, if strength match what happen is that more pain will be encountered. So lets prepare that we are going to war, but not the war for using batons, it’s a war that is fought through arguments, that’s why you test yourselves if citizens reject us what will be the reason and you find answers. 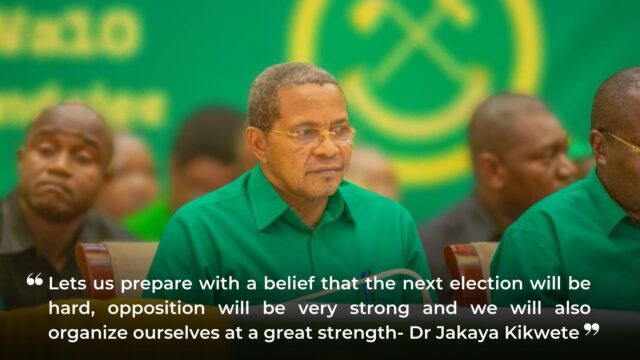 So, Madam President, my other request is regarding something we used to do which is not bad. We were used to train our leaders after every election. You have elected them, there are many of them who are new and that is how it is every time. How many are the first-time leaders [asked the crowd] , good, first times are not that many, but even the old ones, don’t work out of habit and that’s the importance of training, don’t work out of habit, organize training, many can help your training, even  Makamba can help, Comrade Mkama, I’m not sure if  Bashiru will also be ready.

If we start training our people and use the training to develop strategies to build our party, strategies to prepare for 2025, there is a rule in the army that says, ‘a lot of sweat in times of peace, a little blood in times of war’.Let’s prepare seriously as Mr. Makamba has said, ‘You are the fighting force not fight in the sense of fighting, now you are the commanders, Commander in Chief Samia Suluhu Hassan, Deputy commanders in chief Dr. Hussein as well as Abdulrahman Kinana but in Zanzibar, Dr. Hussein is the commander in chief.

READ: Samia’s Speech at the CCM’s 10th Congress: “We will not let you down”

All of us here, our job is to help our leaders and enable our party to get the victory, let’s start organizing now, let’s make strategies now, and let’s find out what can cause us to stumble, what are the answers.

And if you do this in the regional executive committee, district executive committee, just take some time, six months from now, that’s the only work you do and after that you plan. Then you know that we have completely agreed that this is the way we will go and our steps are these. This is a very big party it has a lot of experience, it has a lot of knowledge and I still believe that we will win in 2025 and we will always win.