The marriage between ACT-Wazalendo and Mr Membe seems to be short-lived, but how did it start? The Chanzo brings you the timeline leading up to the current situation.

CCM summons Makamba, Kinana and Membe for questioning. It followed the leaks of telephone conversations involving the three that CCM said amounted to insults against President Magufuli.

CCM Ethics and Security Committee grills Mr Membe for five hours over unspecified misconduct. He told reporters after the meeting that the meeting was constructive. He said: “[The meeting] made me a delighted person because it offered me a wonderful time to discuss both national and international issues.”

CCM expels Membe from the party, accusing him of indiscipline and violating the party’s ethics and constitution. CCM’s Ideology and Publicity Secretary Mr Humphrey Polepole said in a press conference: “The Central Committee (CC) of the National Executive Committee (NEC) has unanimously resolved that Bernard Kamillius Membe stripped of his membership of Chama cha Mapinduzi [CCM].”

Membe tells The Citizen newspaper that he was still a bona fide CCM member, saying that the CC’s proposal that he be expelled was yet to be endorsed by the NEC as required by CCM’s constitution. CCM, however, says the decision had all the blessings from NEC. CCM’s political affairs and international relations secretary, Colonel Lubinga told the paper: “Statements attributed to Mr Membe in the recent past smack of ideological and political immaturity. The fact is that he has been expelled, and he should either wait and see whether he will be pardoned, or he should apply for membership afresh.Let him know that we are far from being troubled or intimidated by his utterances.”

ACT-Wazalendo party leader Zitto Kabwe welcomes Membe to the party. In an internal party meeting in Lindi, Mr Kabwe said: “But [Membe] must understand, from the way our country goes right now, the way poverty has increased tremendously in our country, the way the government of [CCM] has impoverished the people of South, the way democracy is undermined in [Tanzania] it will be treasonous for Bernard Kamillius Membe to continue to insist on remaining with CCM membership.”

Membe returns CCM membership card at the party’s ward offices in Rondo-Chiponda, Lindi Region, and a dozen others join him. He declares his interest to run for the presidency. He says: “We’ll join a political party and run for the country’s top leadership, for the presidency of the United Republic of Tanzania. This year [2020] in October.”

Membe appointed as ACT-Wazalendo’s Chief Advisor, a position previously held by Mr Hamad, who was made the party’s national chairperson.

ACT-Wazalendo general congress endorses Membe for the presidency of Tanzania. An analysis by the Institute for Security Studies (ISS), however, noted that it would be “a tall order for him to unseat Magufuli even as a united opposition candidate.” ISS also said that Membe’s likely entry into the presidential race “doesn’t give the opposition much of a chance.” 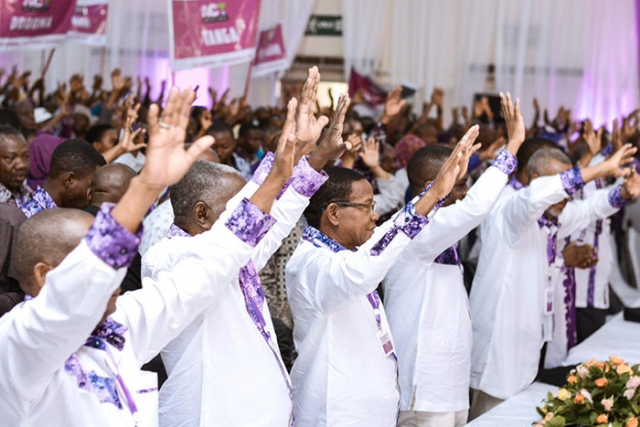 After not being seen campaigning for days, with people questioning his whereabouts, Membe emerges, saying he’s ready to go back to the campaign. He says he was in Dubai for a critical meeting.

Membe’s candidacy in the 2020 presidential election is threatened by the uncertainties that surround ACT-Wazalendo’s position on which candidate the party endorses for the highest office. Government-owned Daily News newspaper reported on September 22, 2020, that the uncertainty followed statements by ACT-Wazalendo Deputy Secretary-General for Zanzibar, Nassoro Mazrui that the party is considering supporting Chadema presidential candidate Mr Tundu Lissu.

ACT-Wazalendo party leader Zitto Kabwe endorses Chadema’s presidential candidate Tundu Lissu during a campaign rally in Kigoma, saying his vote for presidency will go to Tundu Lissu. Mr Kabwe pens an opinion for the South African-based newspaper, Daily Maverick defending his decision to vote for Mr Lissu, writing: “This is the right thing to do for the future of our country and its people. We cannot afford five more years of repression, human rights abuses, violations of our core freedoms and the entrenchment of so many Tanzanians in a vicious cycle of poverty and hopelessness.”

Mr Hamad holds a press conference, saying he was saddened with what Mr Membe had said. He says: “And let me tell you that when brother Membe came to our party, we told him, from early on, we told him clearly that the party’s congress resolves that we have to cooperate with other parties. By [running for president] will you, when we choose to cooperate with other parties, accept it? [Membe] said yes, I would.”

It is not clear at this moment how this development will unfold. With hardly one week remaining before the polls, will Membe drop from the race and endorse Lissu or will he persist in running as a candidate not supported by his party?

As they say, time will prove everything!